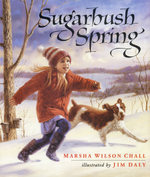 After weeks of below normal temperatures and snow, we are longing for a Chicago spring. A fieldtrip to the sugarbush makes it seem not so far away.  Each year, we travel south to the Indiana State Dunes and Chellburg Farm to learn how the native Potowatmi, the pioneers, and the Chellburg Family of the late 1800s harvested sap to make maple syrup.

Sugarbush Spring is one of the several stories we share before this field trip.  This story is about a young girl who learns from her grandfather the method of tapping the trees, gathering the sap, and boiling it down to a golden syrup.  Beautifully written, this fictional story is filled with important facts that make our trip to the sugarbush more meaningful.  Thank you to author Marsha Wilson Chall for allowing me to quote a few passages here:

The taps leaves scars in the trees.
Let's find two holes in a maple, one on each side, like front and back belly buttons.

Wide trees are too old to tap, skinny ones are too young.
"Let's tap this one!" I shout, and try to reach around a trunk as wide as Rosie [the horse].
"Too old," says Grandpa. "See all the taps? She's given and given till she's nearly given out."
"How about this one?" I ask, wrapping my hands around another tree.
"Too young," Grandpa answers.  "She needs all the sugar she makes this year.
She'll be ready when she fills up your arms."
All around the sugarbush, I measure who's ready, filling up my arms with trees.

The sap begins to run when warm days alternate with freezing nights.
We drill and tap and hang pail after pail until my feet are freezing and the drip-drip-dripple of a hundred trees has stopped.
"Grandpa, the trees are empty!," I shout.
Grandpa laughs. "They're just too cold," he tells me.  "We'll have a freeze tonight.
They'll rest up and run hard again tomorrow. Time to head back."

The syrup is ready when it reaches 219 degrees Fahrenheit.
Already the sugarhouse smells like pancakes.
"Is it syrup, yet?" I ask Jim.
"Too soon," he says, and taps the thermometer. "Should be two hundred nineteen degrees. Seven degrees to go."
I keep my eye on that thermometer: two hundred fifteen...two hundred sixteen...The bubbles creep higher, swelling to the top of the pan. "There she blows!" I yell.
Jim flicks in a drop of cream, and the sap settles right back down, dark and gleaming. "A watched pot never boils over," he tells me.
The silver needle jumps-two hundred eighteen degrees.  The sap boils to fine, golden bubbles...Two hundred nineteen! Jim pours a caramel bubble from his long tin scoop. "We've got syrup!" he shouts.

As an end-of-the-year field trip, we ventured out on Lake Michigan for an architectural tour. In the fall, we had studied the Great Lakes and thought that this would be a great way to wrap up the year.  Chicago spring weather is unpredictable.  The morning began cool and hazy, most of the lakefront covered in patches of fog.  Luckily, during the boat ride, the clouds parted and a warm sun made its appearance.  Our "tour guide" was a recording that was often difficult to hear or too fast to understand.  Most of the children weren't paying attention anyway.  They were more interested in watching the tall schooner that sailed near us or talking to their friends.  One little girl moved close to me and said, "Ms. Harrison, I can't hear what the man is saying and he's talking too fast.  How am I going to remember 3 facts  to write in my journal tomorrow?"  I told her not to worry about facts, just enjoy the ride.  Surprised and with a smile, she snuggled next to me.  We leaned back, breathed in the fresh air, and enjoyed one of our last moments together as teacher and student.