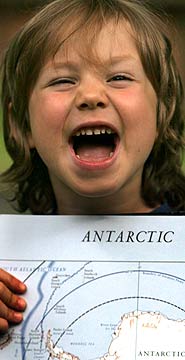 After competing against 500 other submissions,  six-year-old Max Nolan won a contest to name one of the world's largest icebergs, known as C19A.  According to judge Dame Jacqueline Wilson,  Max's idea was "a clever play on words" and "had a friendly ring to it...making the iceberg seem more like a friend who we should look after."

Max explained why he thought Melting Bob was a good name.  “Because of global warming, ice melts,” he said. “And it goes up and down in the sea, so it bobs.”  Max also said winning the contest was “the best thing ever in my entire life”. Go Max!

Melting Bob is now floating 1,600 miles southwest of New Zealand.  In the next decade, it's expected to melt away to less than an icecube.