It's been nearly a month since I last posted and it's all a blur.  Five days of school left and I haven't begun to slow down.  Instead, I'm going nonstop - planning, teaching, mediating, helping, encouraging, reassuring (both students and parents).   The energy is high.  Children are excited and anxious about the end of the year.  Arguments seems to break out every few minutes - "He did this or she did that!"  The kids can't seem to stop chatting and are often silly.  Assessments are underway, parent-conferences are finished or scheduled, and my students visited a third grade class to ask questions about the year to come.

Last night, we celebrated the year with a family potluck.  This is a long standing tradition at my school and one that really brings families and teachers together.  We ate in the cafeteria and children were able to run and play in an adjoining courtyard playground.  As an end-of-the year gift, I put together a iDVD for each child to take home.   Field trips, classroom celebrations, work and play times were all documented in photos.  As I put the slide shows together and tried to find just the right songs, I was taken by how much these children had grown - not only in height but also in all the things they learned and accomplished this year (academically, socially and emotionally).   They ARE ready to begin a new adventure in third grade.

It's been a difficult year for me.  The kids are all terrific and I've grown fond of them.  Each has something special about him or her, they love learning and work hard. The teaching year, however,  has been exhausting.  Pam and I have worked hard to make many accomodations for children with learning issues and classroom management has been a struggle (although it's often felt like a battle).    I'm fortunate that most parents have been supportive and willing to follow our recommendations.  At the potluck, several expressed their sincere thanks to me.  Most didn't seem to really know what a challenge this year has been.  Somehow, their child had a good year despite my own doubts, frustrations, and worries as a teacher.  I worked so hard this year and their recognition meant a great deal.  Here's one of my favorite slideshows from the DVD. Something about the song and the pictures together got me a little choked up.

You've Got a Friend in Me, Randy Newman
Toy Story Soundtrack, released 1995 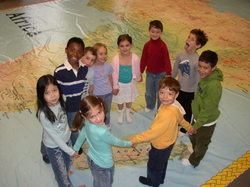 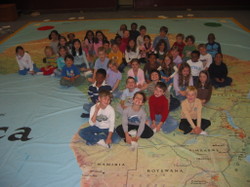 Last week, a giant floor map from National Geographic was on display in our gym.  With shoes off, we explored the continent - the areas colored green and tan, the rivers, the capital cities marked with a star, etc.  We located the direction north and identified the major bodies of water surrounding Africa. Then we played a version of geography Simon Says with our Kindergarten buddies.  Here are some of the directions the kids had to follow:

Stand on the equator.
Find Madagascar and make a circle around it.
Sit on a desert.
Hop on the Nile River.
Stand on a capital city.
Swim to Madagascar.

It was fun for all and gave the children a great visual sense of the size of this amazing continent.  One of my second graders commented, "I never realized how big the Sahara Desert really was." After several weeks of study, it was wonderful to see how much they remembered.

I'm trying to find a link to National Geographic so you can learn more about this map or others like it.  So far, I've been unsuccessful.  I'll post the information as soon as I get it.